Get Directions Report an Absence

The Department for Education has reinforced the need for schools to ‘actively promote’ the fundamental British Values of democracy, the rule of law, individual liberty and mutual respect and tolerance of those with different faiths and beliefs. This ensures young people understand the importance of respect, tolerance and compassion and leave school fully prepared for life in modern Britain. 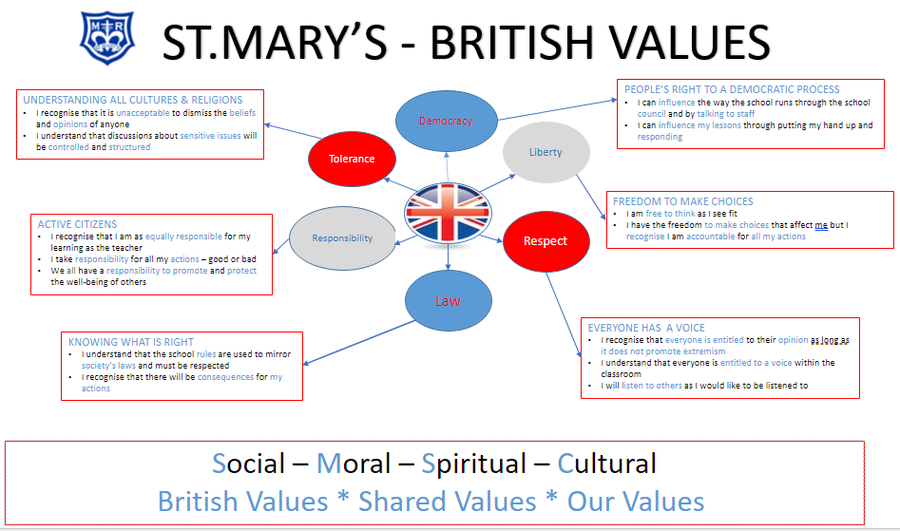 The children at St Mary’s vote for the election of their class school council representatives and these pupils then act as the ‘voice’ of St. Mary’s Catholic Primary pupils. They take suggestions and feedback from their peers to pass on to the council at meetings including suggestions for school improvements or initiatives. They are able to act as a collective council to make changes to the school. Our year 6 children also hold hustings termly for the election of a Head Boy and Head Girl. They are able to have an impact on the selection of their peers who will represent the school to visitors and at whole school events.

The importance of laws, whether they be those that govern the class, the school, or the country are regularly reinforced through our school assemblies, RE and PSHE lessons. The children are taught the value of and reasons why we have laws that govern and protect us. As part of this they discuss the responsibilities belonging to a community involve and the consequences that occur when laws are broken. The school rules centre around the protection and happiness of all children, staff and parents at St Mary’s and are firmly enforced to ensure this. The anti-bullying and behaviour rules are examples of rules that the children understand, take responsibility of and share for the well being of all.

St Mary’s Catholic Primary School fosters a sense of community through faith and the children are encouraged to make choices and know that they are in a safe and supportive environment. As a school we educate the children and provide them with boundaries so that they can make informed choices. Children are encouraged to know, understand and exercise their rights and personal freedoms and advised how to exercise them safely, for example through our e-safety lessons and through the School Council.

At St Mary’s Catholic Primary School we are constantly promoting respect for others as both good manners and good gospel values in action. Children who are spotted demonstrating these traits throughout the school are praised in whole school assemblies and entered into the Gospel Values book. Children are taught to value everyone’s opinions in class debates and participate actively in the schools commitment to its anti-bullying policy. As a school we host several charitable events throughout the year and children show compassion to others from within our community and around the world.

Tolerance of those with different faiths and beliefs

At St Mary’s Catholic Primary School we use Religious Education to provide pupils with a deep understanding of their own faith as well as an awareness of the faith and traditions of other religious communities as a basis for understanding and respecting them. We are able to show how Jesus encouraged tolerance and acceptance of others through stories such as the Good Samaritan and the Women at the Well. Our children are taught to respect the rights of people who have a faith or belief system that is different to their own. Through the PSHE and RE curriculums pupils are encouraged to discuss and respect differences between people, such as differences of faith, ethnicity, disability, gender or sexuality and differences of family situations, such as looked after children or young carers. Assemblies and discussions involving prejudices and prejudiced-based bullying have been followed and supported by learning in RE and PSHE.

Unfortunately not the ones with chocolate chips.

Some cookies are necessary in order to make this website function correctly. These are set by default and whilst you can block or delete them by changing your browser settings, some functionality such as being able to log in to the website will not work if you do this. The necessary cookies set on this website are as follows:

Cookies that are not necessary to make the website work, but which enable additional functionality, can also be set. By default these cookies are disabled, but you can choose to enable them below: